I recently had the chance to taste this 16 year old Highland Park at my friend’s house. It was so good th 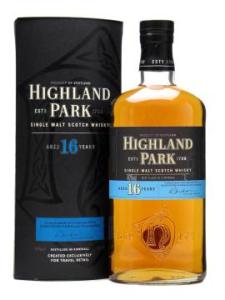 at we ended up emptying the half full bottle. Little did I know that this edition was withdrawn in April 2010. Had I known that I would probably have tried to savour it a bit more. I remember finding it significantly smoother and more enjoyable than the 12 year old Highland Park but without coming across as anything extraordinary. As one might expect this edition does not outcompete the 18 year old bottling. It follows the Highland Park spirit by being slightly sweet on the palate with only a tad of smoke. All in all a slightly above average whisky that in my opinion lacks intensity but is fairly good as an everyday drink.

VERDICT: This is a step up from the 12 year old Highland Park! While the taste is the same as its predecessors it appears more smooth and creamy. Unfortunately the production has been discontinued by now.